What up bloggers? I've been a combination of busy and unmotivated to post anything lately. And its kind of annoying because I'll be driving or otherwise engaged in an activity not conducive to typing and will have a brain spasm and realize that a thought or conversation or person or whatever that just crossed my mind is something I'd really like to post about. And then I get home or get busy or get laid, and the post never happens. Ah well, I guess that's just living real life.

The new job is going oddly. Meaning, I am still not adjusted to the extreme opposite natures of former and current bosses, as well as cultures. Much of the time I feel like I'm in some sort of alternate universe or twilight zone because it such a different gig. A much better gig mind you, but bizarrely different. Anyway I know that's vague but that's how I'm generally feeling at the moment. 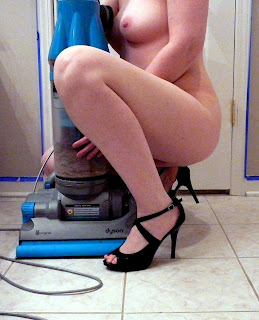 Life is good though. Next week we leave for vacation. Somewhere beachy and warm, with an ocean. We'll be gone for a week and then the summer gets into full swing with a couple of family weddings, a U2 concert, kiddo's birthday, Mr. Man and my anniversary, a possible pseudo class reunion (now there's a topic I need to post about), a trip north to visit C-Man and M, and who knows what else.
Speaking of our friends, they came to visit us a few weeks ago (another post I need to make happen). Mr. Man and M took off on a little trip a few hours away while C-Man and I stayed home and did domestic-like things. And some things I wouldn't exactly qualify as such. Wink wink. It was a fabulous time but too short as always.
Anywho, it's past bedtime for me and so I leave you with a virtual kiss and an oldie but goodie, a picture of me and Mr. Dyson.
G'night.