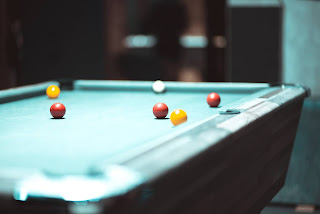 LL grabbed a handful of my hair and pulled my head back. His lips went to my ear as he murmured, "Do you want us to fuck you down here on the couch or upstairs on the pool table?"

Never one to turn down a good pool table fuck I gasped, "the table," and he growled his approval. He took my hand and led me slowly up the steps. Part of me wanted to run up those steps, so eager to get my hands and mouths on these cocks, but the torture was too delicious to waste. Besides, I wasn't in control here.

The upstairs room was large and sparse. A dark wood pool table, the balls haphazardly strewn across green felt took up the far corner by a large window overlooking the street. Not far from the table against a wall was a small couch. It appeared I had options up here, too. Through the window I could see someone walking their dog. That struck me as such a ridiculous and mundane thing to be happening when I was about to have two men use me as they pleased in a stranger's game room.

LL placed both hands on my bare hips and walked me backwards until my ass was pressed against the cold hard wood of the pool table. I wrapped my arms around his neck and he lifted me up to sit on the edge. My legs opened, inviting him in. He shook his head. Again, I was not the one in control. He gently pushed me down onto my back on the table, the clinking of pool balls startled me as he brushed them out of the way.

He was on top of me then, his mouth and hands roughly exploring everywhere on my writhing body as if he hadn't touched and kissed every inch of me many times before. But today... today wasn't like any other time. I could feel his huge cock pressing against my belly. Finally, he parted my legs with his knee and slid his length inside me. I cried out at the sensation of being so abruptly filled. He began fucking me fast and sure, his shallow breathing in my ear. I cried out, "please, slow down, please," I begged him. Partly because I wanted to savor him and partly because I didn't know if I could take the intensity of him all at once like this. Every cell in my body was on fire, my skin felt electric, my head dizzy. My plea seemed to make him regain some sense of control and he slowed his pumping. We kissed, softer this time and I ran my nails down his back. We stayed like that, keeping up a slow steady rhythm for a few glorious minutes.

Then, "Where's RJ? Tell him to come over here." It was a command I was not about to disobey. I turned my head and made eye contact with RJ. He was still sitting on the couch watching us... his dark cock out and hard... his hand stroking. I flashed him a brazen smile and motioned him over.